Magnet Shapes | How to made magnet?

The main virtue in magnets is to attract iron objects. By placing it in such a way that it can rotate freely, one end of it stays in the north and one end in the south direction. Magnets are widely used in electronic devices. Different shaped magnets are used for different uses. Let's we discuss about the different shapes of magnet. 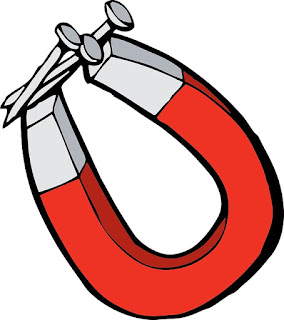 This type of magnet is horseshoe shaped so it is called horseshoe magnet. It is in the shape of a semicircular strip. Its two ends are in the same direction. These types of magnets are powerful. It is used to lift iron objects or any heavy iron object from the garbage.

These types of magnets are coil or annular. It is also called helical coil or electro magnet. It is not permanent but is activated when an electric current is received. This type of magnet is used in automatic doors, computer hard-disk, CD player etc.

How to made Magnet?

A magnet is a piece of iron that attracts iron objects to itself. But it has magnetic force. Do you know how this power comes?
When an electric current flows, an electric field is formed around it. When iron is placed in this field, the iron atoms are arranged in a certain direction. And it becomes a magnet.
Magnets are made in 2 ways and there are 2 types.
A coil of metal wire wrapped around the iron and electricity is inserted into it to form a temporary magnet. A temporary magnet means magnetic force as long as it has an electric current.
By rubbing a large magnet in the same direction with another iron, a piece of iron becomes a magnet and has permanent properties.
One end of a piece of magnet is called the South Pole and the other end is called the North Pole. This feature of the magnet is used in many electronic devices. Used in directional compass, doorbell, speaker, electric car, generator, dynamo etc.
Read More:
Father of different Subjects
Why do we wear black clothes in Winter?
at December 22, 2020
Email ThisBlogThis!Share to TwitterShare to FacebookShare to Pinterest
Tags general

Please do not enter any spam link in the comment section.